I have really been falling apart. Overwhelmed and too much on my plate. Everyone seems to be out to get me. I have a bad temper at work these days because I am so stressed. I leave work thinking of how much I owe and never have time for myself. What’s worse is I see Ryan growing so quickly and I want to be there with him, but I also miss the wild adventures I can have elsewhere. It’s killing me!

So Cherise has been much calmer of late. I have been writing prescriptions of Valium for her to chill her out. She mixes it with a little weed and it makes her incredibly horny. I have swung down to see her on several occasions in the past 2 months. Of course, she has no income, so I am supporting her completely. Then there is Shana, who has been dancing at a new club. She has really been working out lately with incredible results! Sex has never been better with her. Angela has been more clingy of late, demanding me to sleep over with her every free moment. Ryan, of course, doesn’t sleep through the night yet, so I am exhausted when I leave there. He is growing so quickly though!. Then there is everybody else.

I have been selling more of my prescriptions to make ends meet. I have been very nervous about the whole thing, but it’s been my only salvation. I also found better ways of scoring more medications in the department by doing the medication reconciliations for my patients and snagging their prescription pills straight from the bottle. I have been using some of those pills myself. They seem to mellow me out a bit when the alcohol does not.

Anyway, I barely see my house.

This week, I have a couple of days to spend at the beach with Cherise. This has been the one time I have been excited of recent. Right now I am paying some overdue bills and collection threats. My credit score is in the pits!

So to catch up with it all, I drove down to see Cherise and then off to the beach. I told Angela I was doing some away shifts so she wouldn’t get on my case. It turned out that Cherise had her very-close friend (girlfriend) join us. Karen was her name. She was definitely a nice girl and friendly, and very open to all sorts of fun after a few drinks! We all slept snuggly together in on King-sized bed at the beach…. 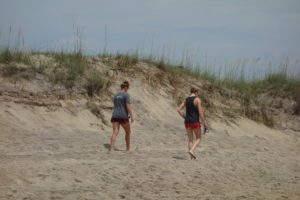 Karen and Cherise made a great pair at the beach