It must have been 12 noon.. No…wait, it was 2 P.M., when we started to get up. What a headache I had. I could barely move. I laid on the bed staring at the ceiling fan rocking back and forth for at least thirty minutes. Even that seemed entertaining. Melanie laid next to me, face down, exposing her incredibly firm butt, which I had explored thoroughly during our crazy sex-filled night. She was sound asleep still. I decided to get up and start moving, but I noticed my legs felt like spaghetti under me as I stood, wobbling from side-to-side. I was so dehydrated that I drank a gallon of water before I went over to the shower. Then I stopped. I noticed immediately that my wallet was out of place, wide open on my pants. All of my cash was missing, some $750.00. I panicked. Yes, I am a doctor, but it takes a long time for me to make that money and at high risk with long hours. I looked over at Melanie, who lay still on the bed. Did she take it? I couldn’t believe it if that happened. There was nothing to do at this point. I sulked a bit over the money, but I still managed to stumble into the shower. Moments later, Melanie stumbled into the bathroom door as I showered and fell over, hitting her head on the toilet. Blood splattered everywhere, and she was out cold with a gash on the forehead. I stared at her naked body in disbelief as I watched her arm twitching.

It took forever for EMS to get to the room. There was a crowd of people watching as they carried Melanie out on the stretcher, her head now bandaged, but blood was still draining through. She woke up a few minutes after she fell and kept asking me ‘what happened?’ Each time I tried to explain to her, she would ask again. As I tried to dial 911, I kept getting interrupted by calls from Angela, who had sent me numerous text messages all night.  By the time EMS arrived, I was holding pressure on Melanie’s scalp, which had been split open from the fall, as I texted Angla back with the other hand. Melanie wouldn’t stop crying and was all emotional about everything in the world. In essence, she was delirious.

The EMS guys were nice enough to let me ride with her to the hospital. I gave them the wrong name and information for Melanie. Yes, her name is Rhonda Mitchell…Her date of birth is 1/28/88. I used an old address of a friend as hers and said that she couldn’t find her ID from last night. By this time, Melanie had gotten the gist of the conversation and kept quiet, ultimately getting registered by a nice elderly lady under the name of Rhonda. Yes, I used an old girlfriend’s information, but I used a different friend’s old address. That way I could keep everything straight in my mind.

Melanie suffered like a champ as the P.A. sutured her scalp. We had some great conversations together about the local beach and life in the E.D here. After an hour and a half, Melanie, or should I say, Rhonda, got a CT of her head, yellow hospital socks, scrubs, a food bag, Dilaudid, sutures, and a prescription for twenty Percocet all for free. We walked out immediately after the suturing was completed and the prescriptions handed to us. The staff was even nice enough to give us a cab voucher to our hotel. I guess they felt sorry for Melanie ( I mean Rhonda). I slipped a few times in conversation, using Melanie’s name when I meant to say Rhonda. Even so, everything went smoothly at no cost to us. 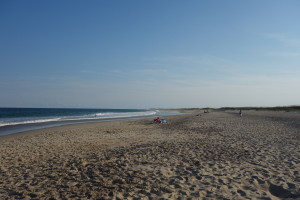 We finally made it to the beach. A bit tired, but excited! 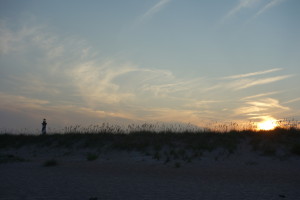 Sunset at the beach was quite a sight. We drank a fantastic Italian red wine as we hung out on a comfy blanket.

What a day. At least the late afternoon and evening were a treat. At least for tonight, nothing turned off Melanie’s sexual needs, nor mine!