It was so sad to see Farah leave. She was en route to Miami to meet up with relatives coming from Europe, but she decided to stop in to see me. When we awakened the next afternoon, having slept for 14 hours, we both realized how fleeting our interlude had been. Farah’s eye teared up as we had sex one last time. I was surprised she had become so attached to me, but I am certain it was just her age that was making her so clingy. I hope she doesn’t go psycho on me!

Next thing I knew, I was on my way to Angela’s. She had taken a cab home with Ryan earlier today because she didn’t want to wait for me. She was a bit irritated with me when I came in and quickly voiced her opinion that I should have taken some time off for her. I actually was off, but I couldn’t say a word. I had to recant the hospital name I started talking to her about when I explained how busy I had been, especially since I hadn’t called her in the past day! She quickly caught on and asked me about the exact place I had worked at yesterday. Of course, I quickly recognized I had misspoke and apologized to her about telling her I had made a mistake about which hospital I had just been at. “Liars never remember their stories,” was what Angela responded to me after I finished my explanation. I looked at her in a puzzled manner to which she then told me she had tried to call me at the place I said I was working at. In fact she had tried several of my hospitals I work at. No one had seen me. I stared at her dumbfounded that she would try to hunt me down, and now I was caught in a lie. To that, I stood my ground. ” I was at Memorial Regional Hospital, just like I said. The person who answered the phone clearly didn’t know what they were talking about.” I don’t think that answer satisfied Angela, but what else was she going to do?

Ryan was so cute, all snuggled in his blue cap and crib. His nose flared steadily with each breath and his eyes twitched as he slept comfortably. Angela looked exhausted, laying on the couch, eyes half open. I sat next to her and tried to rub her back, but she arched away from me. I decided to take control of the situation and just walk out. I quickly looked back as I shut the door and could see a surprised look on Angela’s tearful face….

An hour later, I sat at my home, all alone listening to the creaking of my ceiling as the wind howled by. All alone. I could feel Sarah’s presence in the house to this day. So many months and not a word from her. I miss her. My heart began to race as I realized how my life had been changing, and now I have a child. I want to do the right thing and take care of Ryan and Angela, but what if I made the wrong choice? I didn’t want Sarah to leave me forever. I began to sweat as my heart raced faster and faster. I began to panic, pacing the house without relief. I couldn’t stand it. What next? I was about to call my friend, Tom, but I knew he would just tell me what I didn’t want to hear about my life….that it’s fucked up. Instead, I ran to my Valium. I didn’t have to work until late tonight. Down the hatch it went. Peace here I come. 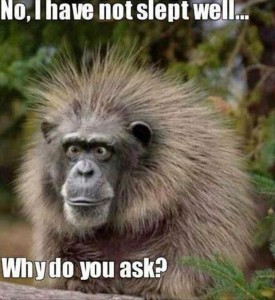